Reward System For Toddlers – Yes or No? 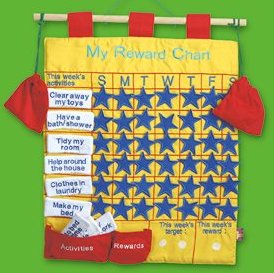 I’ve been doing a lot of thinking lately about reward systems.  At first, I was simply trying to devise a simple reward system for potty-training.  I picked up several items from the $1 aisle at Target that I thought Zach would enjoy.  I set out to establish some simple goals for him that could gradually expand as he reached each goal.  But then I got stuck (or maybe lazy) and never got around to making up a chart for him to use.

Shortly after that, my boy who was doing so well with the potty training started regressing.  At first it was just a little resistance, then it turned into an all out fight to get him to even sit on the potty.  However, the resistance seems to only be at home as he does fine at day care and has done fine at my sister’s house when she has him.  For now, I’m letting off of the potty training a bit because I don’t want to force it and make it a negative thing for him.

Besides the potty-training, Zach has also regressed in other areas and they all pretty much have to do with personal care.  It is an absolute fight most days to brush his teeth, get him dressed, etc. unless I bribe him with getting to watch Blue’s Clues when we’re done.  If I had all the time in the world, it wouldn’t matter.  I could let him do things at his own pace, but most days we’re on a pretty tight schedule and I don’t have ten minutes to convince him to let me brush his teeth.

Now I realize that he is two.  He’s trying to establish his own routines and exert his own opinions.  The problem is, he’s two.  He doesn’t understand why he needs to brush his teeth no matter how many times I explain it to him, nor does he understand why he should do anything else that I tell him to do.  I don’t think my requests are unreasonable.  Most of the things that I want him to do he has been doing for a long time, he just no longer wants to do them.

I’m tired of threatening time-outs or other punishments just to get him to cooperate.  Basic positive reinforcement doesn’t seem to phase him.   I don’t want to bribe him with TV time because he gets more than enough of that as it is.

That’s where the reward system comes in.  I need to find some way to encourage him to follow directions and to do the simple daily tasks that he already knows how to do.  I’m just not sure whether to narrow it down to specific tasks or whether to make it more general.  I’ve consulted Dr. Google and have a few ideas that may or may not work with him.  I’ve seen a reward system work well for my 7-year-old nephew.  But, I’m just wondering how effective it might be for a 2-year-old.

If anyone out there has any advice or has tried reward systems with your own kids, please share your experiences.  I’m all ears.