Intimidated By A Blank Page

I’ve been sort of lying low on the internet for a while now.  My blog posts have become much more random and infrequent, I rarely post on Twitter, and while I do keep up on Facebook most of the time, I don’t post nearly as often as I used to.  I’m still reading though.  I try to keep up with what my friends are doing.  I check in on Twitter a few times a day (usually) and what I don’t catch there, I get on Facebook.  My Google Reader, however, is overflowing with unread posts.  I tend to read posts that are linked on Twitter and Facebook more often and this one about journaling really caught my attention.

You see, I have this slight obsession with paper products and pens and I really have a weakness for pretty leather-bound journals and notepads.  Just before 2010 started, I purchased a pretty lime green covered journal and promised myself that I was going to use it.  I also selected a pack of multi-colored pens that were to be used specifically in that journal.  I made a total of one entry in that journal, which listed my one goal for 2010 – to complete the Susan G. Komen Race for the Cure.  I never added anything else.  The blank pages intimidated me.  As with every other journal I’ve ever had, I didn’t want to mess up the perfection of the book before me.

After reading Karen’s post, however, I have a completely different outlook on what a journal can – or should – be.  It doesn’t have to be elaborate or deeply introspective.  It can simply be a list of to-do’s or what you did that day, a favorite photo or quote that you came across, a picture drawn by a child.  The everyday things that make life what it is are probably much more worth remembering in years to come than a perfectly thought out rant about the state of the world today.  And really?  The messier the better.  Why not scribble that design that has been playing around up in my head?  Why not write down that funny comment that my daughter made last night?

I couldn’t wait to get home, pull out that pretty, practically brand new, green-covered journal and start writing.  I took it to bed with me last night and, before I turned out the lights, started writing.  My first entry was a list of accomplishments for 2010.  I had two pages filled in no time.  Next, I wrote a list of things I would like to do in 2011 – not goals or resolutions, but just things I would like to do.  By the time I stopped, I had filled four pages of that perfect little book.

And the best part?  I went to bed feeling peaceful, instead of lying awake with a million thoughts swirling through my head.  I slept well, and woke up feeling refreshed this morning instead of tossing and turning all night.  Maybe it was a fluke, but if a few minutes of writing is all I need to do to get a good night’s sleep, I’d say it is well worth it.  Who knows, maybe it will help me get back to blogging on a regular basis.  I already have a couple of post ideas from things I scribbled out last night.

I’ve been trying to write something, anything, for days.  But the words just won’t come.  I want to write about what a special, amazing, yet simple, Christmas we had, but I don’t think words can convey the feelings in my heart this time around.  All I really can say is that it was filled with fun, good food, and people that I love dearly.  I didn’t feel stressed, even though I rushed to get everything done.  The kids were so excited and so much fun. We had Hubby’s parents here again this year, which makes it even more special.  It was just a perfect day all around. Zach was thrilled that Santa did indeed bring him a DSi. He was convinced he was getting it, so I’m glad it turned out that way or we would have had a very unhappy little boy. Evie was pretty happy with everything she got, but she especially loves the little trampoline. She’d be much happier if she didn’t have to share it with her brother though. She really got into opening the gifts this year and it was so much fun to watch her. After the gifts were all opened and the kids had some time to play, we headed over to Grandma’s house where Hubby was more than happy to try out his new turkey fryer. Zach had an extra surprise at Grandma’s when he bit into an olive and out came a tooth! It was his first one to lose and he was so excited! (apologies for the bloody picture, but I haven’t managed to get a better one yet!)

We had a delicious dinner and opened gifts with the family, visited, played, and finally came back home when we were completely exhausted from the day. Then we got up the next day, headed to my Dad’s house, and did it all over again! The kids enjoyed having another day of Christmas and it was nice to spend some time with my Dad and his wife since we don’t see them often anymore. We even managed to get a picture of all six grandkids together again. They may not be smiling or looking in the same direction, but they are all in the picture.

And that was our Christmas. It may seem a bit hectic, but to be perfectly honest, it was one of the best (and most relaxed) Christmases I have had in a while. 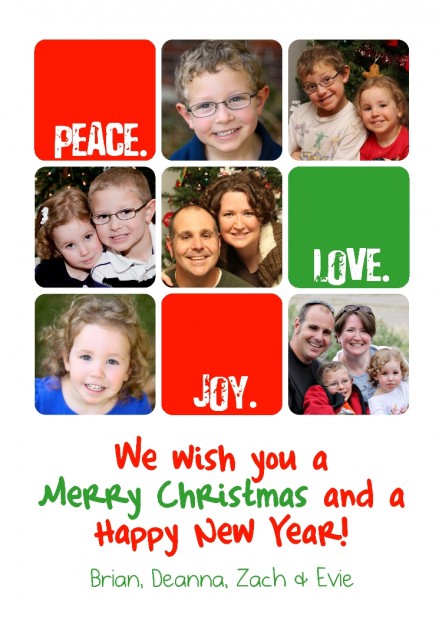 A Visit With Santa We had a hard time fitting it in this year, but we finally made it out Saturday for the annual visit with Santa. The kids were so excited and knew exactly what to do when it was finally their turn. Zach told Santa the only thing he wants for Christmas is a DS and a game to play on it. I sure hope Santa brings him one or he’s going to be a very disappointed little boy Christmas morning. I’m not sure what Evie asked for, but I’m sure she will be happy with whatever Santa brings.

I didn’t have a chance to speak to the big guy myself, but honestly, all I really want for Christmas is to be surrounded by my family and enjoy the time I have with them. It is all I really need and I’m pretty sure I’ll get my wish.

She Really Is Paying Attention

Scene: Zach, Evie, Mommy, and Granny riding in the car on the way to order yet another pair of glasses for Zach.

Zach: Happily singing and chatting with Mom and Granny…

Evie: Playing with an old cell phone that she likes to carry around. Suddenly she yells out, “Stop talking! I’m on the phone!”

Granny and Mommy: Stifling our laughter the best we can

Hmmmm, wonder where she gets that from???

This One Is For The Grandparents

Zach’s school had a Winter Music Program this week.  Sadly, it was at 3:00 in the afternoon and nobody could make it there but me.  Lucky for all of you though, I recorded as much of it as I could with my shaky hands.  I ended up sitting on my knees in front of the chairs they had set up for parents as it was the only place I could get a clear view.  Here are the four songs that the Kindergarten performed, minus a few seconds I missed at the beginning of a couple songs. Zach is a little hidden by the big hair in front of him, but you can find him at the end of the second row from the top, on the right side.

The best part though, was at the end when the principal announced they had a Christmas gift for every single child, sponsored by Toys for Tots. I’m not sure I’ve ever heard so many kids squeal all at once!