My photography skills still need a bit of work, but these kids are absolutely adorable!

I’ve been doing a lot of thinking about the direction my life is headed.  I’ve been feeling very out of control and in need of a bit of structure.  Part of that structure includes getting control of our family budget.  This was supposed to be the month that I tightened things up and started paying a bit more attention to exactly where that money is going.  I’ve been trying really hard to cut down on my spending (no laughing mom!) because I’m the one that does the shopping and always ends up picking up way more than what is on the list.  Yes, I admit to having a problem with that.  Shopping is my escape when everything else in life gets me down.

Just after I made the conscious decision to do this, all kinds of unexpected expenses popped up.  First, there was the cracked windshield.  I didn’t see that as a huge deal, but something that will have to be dealt with eventually.  Then, there was the A/C going out in my car.  We paid $100 for a fix that only worked for two days before it gave out again.  It can wait until Spring/early Summer before it has to be fixed, but it still makes me angry.  Next, my radar detector was stolen and I got a ticket the next day.  The radar detector is a must-have item for me.  Buying a new one is most likely less expensive than the tickets I will rack up without it.

That’s three pretty major unexpected expenses in a short period of time, but that’s not all!  Anyone want to know what happened this weekend?  Our basement drain backed up and our washer broke all in one day.  The drain isn’t a huge issue because we don’t own the house.  My boss (and landlord) will foot the bill for that one but the washer?  That’s one heck of an unexpected expense and one that can’t really wait.  With a baby in the house I do laundry nearly every day and I don’t have time to go to a laundromat.  We haven’t decided whether to try to get the washer fixed (only about 6 yrs old) or to just buy a new one.  I’m guessing a repair bill would be at least half of what a new one would cost anyway and maybe more depending on parts/labor.

We do have a little bit of money back in savings but I was planning to use a little of that for a weekend trip we have coming up (where I’ll finally get to meet my almost 1-year-old niece!) and the rest was being saved up for taxes.  I’m just tired of never having enough money to go around.  I’m tired of living on credit cards and being in debt.  Every time I have the slightest hope of being able to crawl out from this mess we’re in something else happens.

I’m just hoping and praying that nothing else major happens for a while so we can try (once again) to get caught up.

Saturday night I took my sister to JoAnn’s to find some fabric for some curtains she wants made.  I thought I was doing a really great job of not picking up any extras, but we stayed in the store just a little bit too long.  I ended up picking up a couple of fabric quarters, some ribbon, and bias tape to make Evie another little pillowcase dress.  The quarters were just the right size to make her a dress and a matching headband. 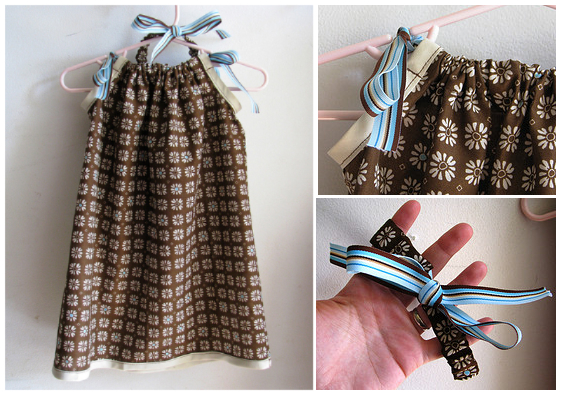 This dress is a little bit longer than the Halloween dresses.  I’m hoping Evie can wear it at least through the next Spring and maybe even Summer.  I love the fabric (if you look closely a few of the flowers have aqua colored centers) and I think the bias tape around the arm holes and the bottom really gives it a finished look.  I also made the headband a little differently this time and I think I like it better than the other ones.

What do you think?  I would love to see more pictures of pillowcase dresses if anyone else has made any.  These are so simple and I have lots of ideas for little embellishments!

If anyone is still wanting to purchase a Halloween tote bag please get your order in now! Orders must be in by 5:00 p.m. Friday to ensure arrival before Halloween!

Can I Just Go To Sleep And Wake Up Next Week?

This has not been my week.

The weekend was good, but I still didn’t get nearly enough things done around the house.  I did make a yummy dessert for dinner Saturday night and got to  spend a little time sewing and taking photos, so that kind of makes up for the lack of housekeeping.  Unfortunately, the housekeeping still has to be done and there will just be more to do by the time I get around to it.

The weekend did not end well though.  I really should consider it the beginning of a horrible week I guess since it started Sunday night.  I had fully intended to get the kids to bed Sunday night and then spend some time writing Evie’s 7 month letter while Hubby and I enjoyed our Sunday night shows.  I suppose that was my first mistake – actually planning to do something.  I suppose I should have known better.

Both kids decided that sleeping was unnecessary that night.  Zach refused over and over again to go to bed.  Once he was finally in bed he kept getting up all night long.  Evie also refused to go to bed.  Every time I tried to lay her down she would wake up crying.  Eventually both restless kids ended up in bed with me which meant very little sleep for any of us.  Hubby was smart and sent to sleep in Zach’s bed.  He was the only one that got any solid sleep that night.

Monday morning was a rush because I had forgotten to pack the bags we needed the night before.   I also had to pack up an extra bag for the kids because I had a meeting after work and needed to take them to my mom’s for the evening.  Zach needed a quick bath because the restlessness during the night resulted in a wet bed the next morning.  I’m not sure how I even made it to work, but I did…eventually.

I skipped out on work a few minutes early, rushed to day care, rushed through McDonald’s and back to my mom’s with the kids.  Then I scarfed down my sandwich, nursed Evie and was out the door for my meeting.  The meeting actually went very well and I left in a good mood.  I picked the kids up and headed home.  Apparently, when I got home and unloaded the kids and our fifty million bags I forgot to lock my car.

I woke up Tuesday morning in a great mood.  Evie had slept through the night until 6:45, which meant I got a great night’s sleep.  Zach wasn’t too difficult that morning and we headed out the door almost on time.  Just as I pulled out of the driveway, I noticed something odd.  There was a plug missing from the cigarette lighter in the car.  At first I thought Hubby had just grabbed his phone charger out of the car, but it was still there.  I racked my brain to figure out what else was missing and then it hit me.  My radar detector was gone.  I called Hubby just to make sure he hadn’t grabbed it for some reason, but I pretty much knew that he wouldn’t have taken it.  While I was talking to him I also realized that the ash tray full of change was also missing.  Nothing else seemed to be bothered.  All of the cd’s were still there.  The stereo and Hubby’s expensive sunglasses were still there.  I was pretty pissed off that the radar detector was gone, but what bothered me even more is that someone was in my car.

The worst part was that it was all my fault.  I was the one that left the car unlocked.  It is possible that it would have happened anyway and that I would have a broken window on top of it all, but I still feel like it is my fault for being stupid.

The rest of Tuesday wasn’t so bad, except that I couldn’t really focus and Evie decided not to sleep again.  Then I got up this morning, drove the kids to day care and got pulled over for speeding.  I knew as soon as I looked at my speedometer that it was coming.  I drive through a school zone ever morning and I know to slow down there but for some reason I was spacing off.  He clocked me going 38 mph.  Fortunately, the cop was a nice one and I have a pretty clean driving record.  He ended up giving me a $12 citation for not wearing a seat belt (even though I was wearing it) instead of the $100+ ticket that I should have gotten for speeding in a school zone.  I completely lucked out.  I’m not sure how I got so lucky, but I thanked him profusely as he walked away.  The worst part is that I have to drive by there every day and now he’ll be watching for me.

So, that’s pretty much it.  It has just been a really crappy week so far.  Plus it is cold and dark and rainy outside.  I just want to crawl back in bed and stay there until next week.  It has to get better, right?

My niece Caitlin came over on Saturday morning and it gave me the perfect opportunity to get some photos of the girls modeling their dresses.  Caitlin didn’t want to sit still, but I still managed to snap a few cute shots of her.  Evie, on the other hand, was posing and grinning like a pro.  They both looked adorable in their dresses and matching headbands though. I love these dresses so much that I bought more fabric lastnight so I could make a few more.  Aren’t they just adorable (the models and the dresses)?
2 Comments

After finishing up my Halloween Trick or Treat bags (which you can still buy here), I had a bit of fabric left over.  I debated over what to use it for, then decided that it would make some adorable little dresses.  I’ve been finding tutorials all over the place for pillowcase dresses and since I was dying to make one I decided to whip up a Halloween version.  I figured as long as I was using scraps I wouldn’t mind so much if I screwed it up. I used Leslie’s Pillowcase Dress Tutorial for the basic steps but adapted it for size.  I left off the frills and didn’t have any bias tape for the armholes so I just turned it under and top stitched.

The first one went so fast that I went ahead and made up another one for my niece.  I haven’t had a chance to try them on the girls yet, but I held one up to Evie and it looks like the size came out just right.

I discovered that I definitely need to work on keeping my stitching even, but I think for a first attempt these look pretty good.  I also decided that I like the thicker ribbon used on the candy corn dress so I’ll probably go switch the ribbon on the other dress before I give it away.  Once I finish up the matching headbands, I think the girls will look just adorable in them!