It may not be Fall quite yet, but football has started, kids are headed back to school (my oldest is starting preschool!), the weather is cooling off just a bit, and I am getting the itch to knit.  The leaves will be falling before we know it.  I’ve found myself digging through my yarn stash and browsing patterns online trying to decide which project I want to tackle first.  I would really like to work through some of my stash this winter, but some of the projects I want to do will require new yarn purchases. 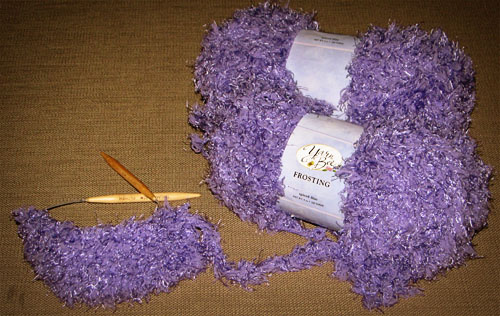 First up is a scarf for me.  I thought I was going to make this two years ago, but just never got around to it.  That’s why it’s first on the list this time around.  I started it last night, but didn’t get very far.  I’m hoping to watch a movie or two and work on it this weekend.

Next on my list is to attempt making Evie some pants, or “longies” as they’re called in the cloth diapering world.  I’ve found a couple patterns that adapt for those of us who don’t cloth diapers so I want to take a stab at it.  It may be a bit of an ambitious goal.  If anyone has any longies patterns that they love, please send a link my way!

I also have some Christmas gifts in mind, mainly for my three nieces.  I’ve got some cute girly yarn in bright colors (seen on this hat) that would make some really cute hats or other items.  I haven’t decided exactly what I’m going to do with it, but the wheels are churning.

I’d also like to crochet Evie another Roselette top.  They’re just so cute and I’m pretty sure she’s outgrown the ones I made last year.  She may get a few more wears out of them, but they aren’t going to make it through the entire Winter.