I couldn’t decide which one I wanted to post, so I’m posting two songs that I’ve been digging this week.

First up is my beloved Pearl Jam doing “Johnny Guitar.” I got to hear it live when they were here in KC last May and it’s been in my head lately for some reason.

Next in line is G. Love singing “Just Fine.” I’m really enjoying his recent collaboration with The Avett Brothers, Fixin’ To Die, and you can find this song on there as well.

I’m Not The Best at Making Decisions

Never in my 33 years of life have I dreaded summer. I have always looked forward to it. I love the sunshine. I love the heat (as long as I have air conditioning available when I want it). I love splashing in the water with my kids, taking trips to the lake, BBQ’s, and all of the other fun stuff that comes with summer.

This summer, however, there’s a new component – trying to figure out what to do with Zach while school’s out. This is filling me with so much anxiety right now that I can’t even think about the joys of summer yet. It’s complicated this year. If Evie was on school break too, I would hire a sitter to come to our house and call it good. I seriously doubt I could find a sitter to come to the house for what I can pay for only one child. If both kids were home it would be much more feasible, but I’m not ready to take her out of the day care that we love (it already makes me sad to think about putting her in preschool).

I’m not really sure where else to look at this point. I’ve checked with the YMCA day camps and they are a bit more pricey than what I can pay. His old preschool has a school-age program in the summer, but he wasn’t very happy there towards the end and says he doesn’t want to go back there. I’m sure there have to be more day camp programs around, but I haven’t found them yet, at least not ones that we can afford.

It seems odd that we can’t afford day camp costs, considering that we paid for full-time day care for the first five years of his life. Those years were a big struggle financially, especially after his sister came along. Now that we finally have a little bit of breathing room (thank you public school system!), adding on another $140-160 a week seems like a lot of money.

Then there’s the other issue that’s staring me in the face. Now that we know he has some definite sensory issues, I worry about introducing him to a new situation. What if we put him in a summer camp and he just can’t handle it? It took us several months of school before I felt like things were under control and I feel like we’ll be starting all over again. I don’t want the poor kid to be miserable all summer because he’s put in a situation that makes him uncomfortable. For my own comfort, I need to know that he’s somewhere that can handle his quirks and can manage a meltdown if/when it happens. I would hate to think that all the work we’ve done with him over the last few months would be blown because he isn’t in a place where he can get the support he needs.

So I’m stuck. I know I still have two and a half months or so to figure it all out, but I’m a little stressed out about it right now. Parenting brings so many challenges, but deciding who is going to care for my child when I can’t is the most challenging thing I’ve ever had to do. I never feel like I’m making the right decision, although I have been super lucky a couple of times. I guess I just have to keep looking until I find something that feels right.

In the meantime, I’m sending him back to Evie’s day care for spring break next week (even though he thinks he’s too old for it). He’s not at all happy about it, but I tried to buffer the disappointment a little by signing him up for another session of swimming lessons. I can’t wait to see him in the water again. Not only does he love swimming, but he’s getting pretty darn good at it too!

When Mommy Says No

I was trimming Evie’s nails after her bath when she asked me if she could have paint on them too. Since it was already bed time, I said no and told her she would have to wait until tomorrow night. Her response? “Daddy will. Daddy’s always nice.” Apparently she was right.

This weekend was a bit of a bust when it comes to the long to-do list I had carefully crafted on Friday. I think my lists are a little more ambitious that my body. I did get a few things checked off, but those were mostly the fun things. The not so fun things, like mail state tax returns and update budget spreadsheet, somehow were forgotten.

Friday night we stayed in, and after everyone went to bed, I stayed up and finished sewing Evie another skirt. My sewing is far from perfect, but I’m having fun experimenting and the skirts are turning out really cute.  I added a ribbon trim to the bottom of this one and love how it turned out. Sadly, my sewing machine decided to quit working just after I finished this one so I didn’t get to do any more this weekend. I will have to remedy that soon as I have a stack of fabric already cut for several more skirts. Saturday morning we had promised the kids each a surprise. Evie got to go to Grandma’s and play with her cousin, Caitlin. Zach got a trip to the movies with Mom and Dad to see Rango. It was a pretty cute movie, and included enough adult humor to keep it entertaining.

After the movie, we stopped at the pet store to invest a bit of our tax refund in the Tidy Cat Breeze cat litter system. We searched and searched and couldn’t find it in the store, so we were letting Zach look around at the animals. He was really into the fish and started asking the inevitable question, “Mommy, can we just get a goldfish?”

We stood firm for maybe a whole ten minutes. We already have enough pets to take care of. We don’t need any more. Then we started wavering a little bit. Maybe one fish wouldn’t be so bad. We started looking at the Betta fish. Before long I had a new fish tank in my arms, along with the necessary supplies. We decided on a Betta and went back to pick one out. That’s when we realized that the Breeze boxes we had been looking for were sitting just under the Betta fish display. We got the litter boxes (both with $10 off coupons on them!). Zach picked out his fish and proudly carried it up to the checkout counter.

After the required 24 hour tank set up time, Mario Oscar Perrin, the red Betta fish, is now happily swimming around in his new home. So far Zach has been very responsible in feeding him and he goes in to check on him often. The cats have also discovered this little moving thing and are quite interested in figuring out how to get their paw into the small opening on the top of the tank. I’m just hoping we can keep him alive for a while.

In the Eye of the Beholder

I had an off day today. Not a bad day, just a blah kind of day. A mixture of Spring fever and poor food choices most likely. But, it was a beautiful day so I decided to take the kids by the park after I picked them up tonight. They have been begging to go to the park for over a week now, so I figured we might as well get it in before the weather gets cruddy again.

I didn’t plan on taking pictures, but at the last minute I grabbed my little camera out of my purse for a few snapshots. I got a lot of blurry pics of the kids running and playing, but I managed to capture one that I just absolutely love. Evie wanted to get on the tire swing, and Zach came to join her a couple minutes later. I asked Evie to lean in close to Zach and I got my new favorite photo. 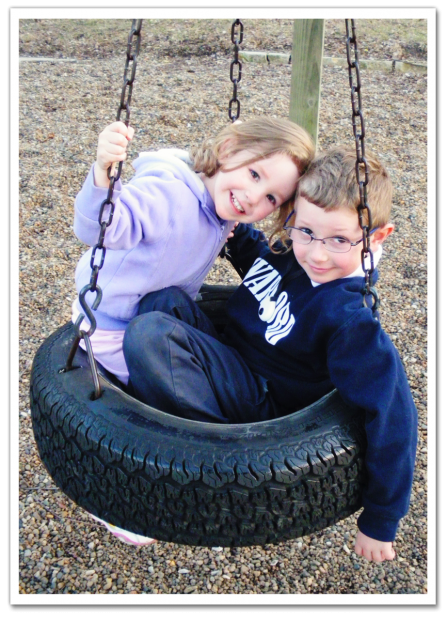 The photo isn’t perfect by any means. The focus is a little fuzzy. Zach’s glasses are tilted funny. There’s a pole coming out of Evie’s head. But to this mom of two kids who spend probably 75% of their time together these days fighting, it is a perfect photo because it proves there was a moment in time when everyone was smiling and happy.

This is why I love photography. Getting this photo changed my entire mood for the day. Well, maybe a little time out in the warm sunshine helped too. Well, that was the longest short month ever. I’m so happy that we’ve finally made it to March. It seems like my birthday was ages ago, when really, it has only been 3 weeks. I feel like I’ve gone through most of it in a daze. I spent nearly a week sleeping after my surgery, then spent the next week in a mad rush to get things caught up at work. Now that I finally feel like I can breathe again at work, my house is a mess and the laundry is piling up. Oh, how I miss my mother-in-law!

I had my 2-week check up today with my doctor and everything is looking good. I was a little concerned about one of my incisions, but she seems to think it looks okay and told me to put some neosporin on it a couple times a day. She said I can go back to normal activity as I feel up to it, as long as I don’t overdo it. I didn’t tell her I’ve been pushing myself to that point for over a week now. She obviously does not know my kids or how much energy they require.

And now, in order to rescue this extremely insightful post, here are cute photos of my kids that I took last week.