As If Disney Wasn't Getting Enough of My Money Already

Yesterday afternoon I realized we were short on diapers, plus Evie was running a fever and had just taken the last dose of Motrin so I decided we needed to make a quick trip to the store.  Since it was near lunch time, I decided we might as well all go grab some lunch and then stop at Target on the way home (yeah, I took my sick baby out to eat and to Target).  It really all started out quite innocently.

So while we’re roaming the aisles of Target to get the essentials that we need, we happened across some kid-sized fleece blankets that were on clearance.  I’ve been meaning to get Evie a new blanket because her only larger sized blanket is a double thickness fleece blanket and it is really a bit too warm for summer.  I couldn’t find any prices marked on the clearanced blankets, so I decided to look down the next aisle to see if there were any others marked down.  I spotted a couple that I liked – a generic flowery one and a cute pink and brown Hello Kitty blanket.  I held them up for Evie to pick the one she liked and she swatted them away with her hand.  She then proceeded to point at the Disney Princesses blanket on the shelf and make her sounds that say “I want that one!”  At least it was blue instead of pink.

So we travel on down the aisle and end up near the toys where Daddy and Zach get very distracted with some Transformers.  Evie and I keep walking until we reach the shoe section.  Her last round of shoes are all starting to get a bit tight, so I thought I would see if I could find a cheap pair or two and start moving her to the next size up.  As I searched for a good bargain, Evie was busy picking out her own pair of shoes.  The first pair she pointed and grunted at were cute, but too small for her.  We kept searching.  I found a cute, sensible pair of tennis shoes that would work, but she would have nothing to do with them…because she discovered the Disney Princess tennis shoes next to them.  She started screaming for the Princess shoes.  They weren’t so bad and they were tennis shoes so I gave in.

While she hugged her Princess tennis shoes I continued to dig through the racks searching for some cheap sandals.  That’s when she spotted these: 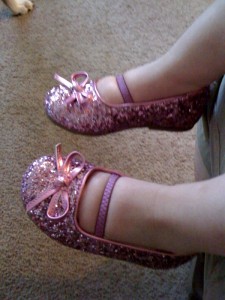 The look of sheer joy on that girl’s face was indescribable.  The look disappeared real quick and turned into a murderous scream when I tried them on her and then attempted to take them back off.  I tried to convince her that hte silver Circo brand ones (that were exactly the same other than the color) were better but she wasn’t having it.  She insisted on the pink ones.  She wore them all the way through the store, allowing me to take them off only long enough for the guy at the check-out counter to scan the tag.  Oh, and guess what they have inside the shoe???  Disney Princesses.  They have barely left her feet since we bought them, even though the straps are starting to rub blisters on the top of her feet.

Apparently I’m just not going to win at this game.  Up until yesterday, there were no princesses in my house, unless you count Tinkerbell, but technically she’s a fairy.  She really hasn’t been exposed to princesses at all, yet she suddenly loves them.  I have no idea how my daughter turned out to be such a girly girl.  I guess she’ll just have to play in the mud in her sparkly princess shoes.

Yes, I’m a bit of a sucker, but if her brother is going to be dressed head to toe in Lightning McQueen I guess I better just get used to princesses too.  What can I say?  I like seeing my kids happy.